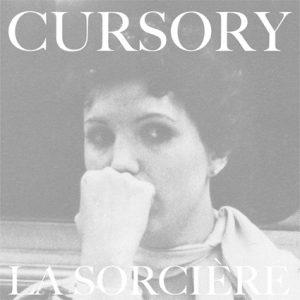 CURSORY ‎”La Sorcière” 7″
Tested Souls
Ritual drone what was meant to be listened at 45rpm, but felt better on 33rpm! Slow repeating patterns going predictably from beginning to end, without sounding particularly interesting or innovative. Running at slower speed than intended, makes all sounds slower and lower pitch. Like the parent label, Blossoming Noise, also Tested Souls appear to take care of packaging. Neat silver printed cardboad sleeves and paper innerbags with stylish graphics. One side of 7″ is “reversed”, needle moving toward outer edge of record. Both sides end to locked groove. But in the end, format hardly allows one to sink into meditative state within short 4+ minutes playing time per side and barely offers musical substance to justify this material to be listened as “songs”. However, it is not that bad. If one piles up bunch of Drone Records 7″s and throws this between, I’m sure its satisfactory listening. Outside any kind of context, alone, it doesn’t have much to offer. (MA) 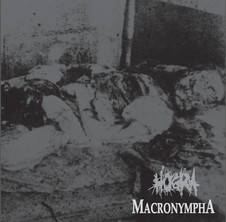 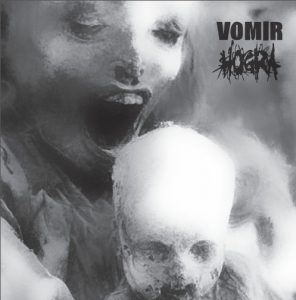 HOGRA / VOMIR split 7″
HOGRA / MACRONYMPHA split 7″
Blackseed Recordings
Perhaps it’s not too bad route for younger band to make split 7″s with all known noise heroes? Back in the day, I did some of this too…  But looking it now, gives slight opportunist feel. As if companion for split is chosen most of all due their ability to move records?
Hogra presents 2 different 100 copies singles. Vomir provides their usual crunchy and ultra static rumble, where grainy and fuzzy noise textures decorate the overtly motionless “composition”. For me, Vomir works exactly in this. When format forces it to become “song”, it becomes something. The longer the format, the less there is. Certainly the distortion particels create sub-harmonic patterns and neat textures, but even in case of noise, repeating the exact same, becomes highly unnecessary.
Macronympha in other hand is known for being responsible for countless releases, where enough differences make pretty much every release worth getting. While some are without doubt classic, some are not. But still good. This is one of the first thing from recent years Macronympha releases, I feel could have remained unpublished. It is not atrociously bad, but it simply is quite useless compared to vast majority of supreme Macronympha output. Chanses someone will feel tempted to listen this opposed to hundred better ones… Can’t see that happening. Somewhat lazy mix of rugged noises.
For Horga this perhaps works as advantage. One can easily point out Hogra comes as more interesting project on both splits. Vomir split has delay effect drenched vocals and slightly distant and coarse noise on the back, but Macro split tracks are like step further. Harsh and detailed noise, reminding the era of MSNP america noise, yet with hints towards “power electronics” in form of vocals.  Neat stereo effects for vocals that emerge below the noise. It has much more texture and element of craftmanship than many vocal oriented bands who rely on traditional synth sounds. (MA)