This was already my 5th time at Tower, if I’m not mistaken. Festival has proven to be worthy of visit for number of reasons. Dresden is pretty easy city to get into. Venue is good place to have industrial shows and festival line-up has always been mix of trusted bigger names as well as healthy policy of giving new artists possibility. 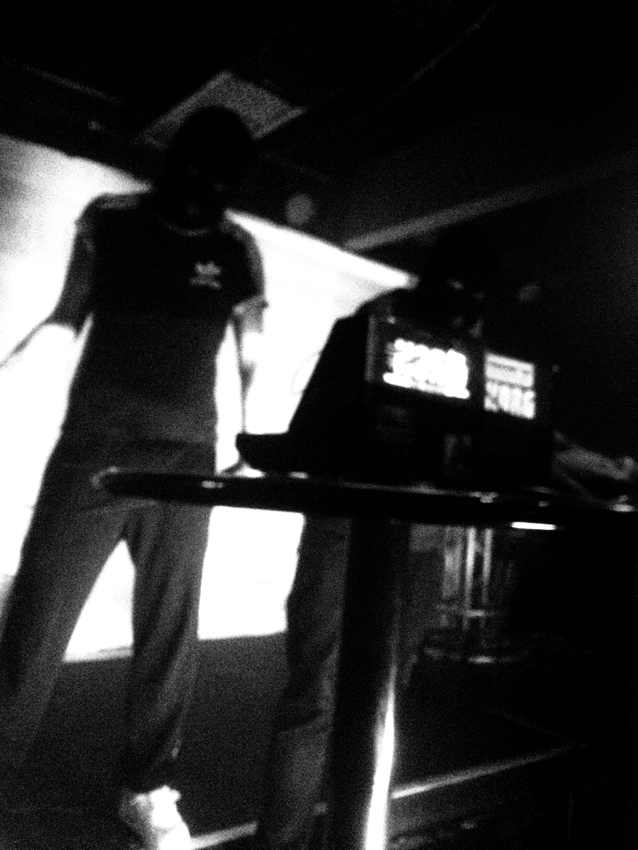 Friday started with one of the new ones. Young Hustlers may not be known for many due having only couple releases out, but there is clearly fuzz about them out there. Very much in fine tradition of European heavy electronics, but with Swedish twist. Instead of political commandos, you got two hustlers in adidas gear and skimasks. Throbbing synth oscillations of heavily processed vocals. Almost as if vocals would trigger burst of flanging & phasing electronic shockwaves instead of even remotely recognizable lyrics. There is something quite different in Swedish power electronics related to “Styggelse” vibe. While in some countries bands take certain role to perform, it feels like the drugged and angst-fueled assault isn’t show at all, just the way it is. 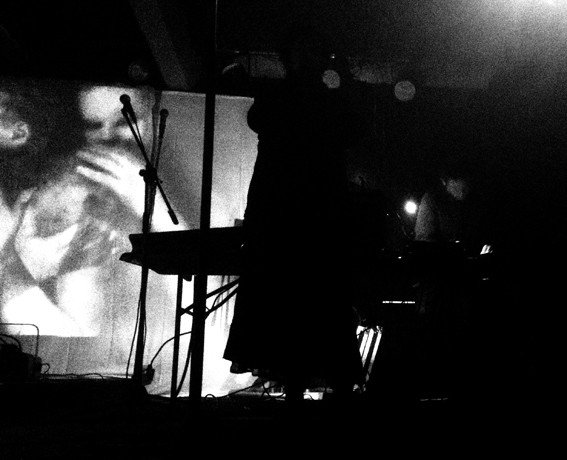 Christblood from Poland was entirely different side. Theatrical and more elegant experimental act. One man focusing on creating electronic sound on the back with extensive amount of gear, and vocalists on the front. After opening assault of Young Hustlers it just didn’t feel loud and strong enough, although not much to complain. 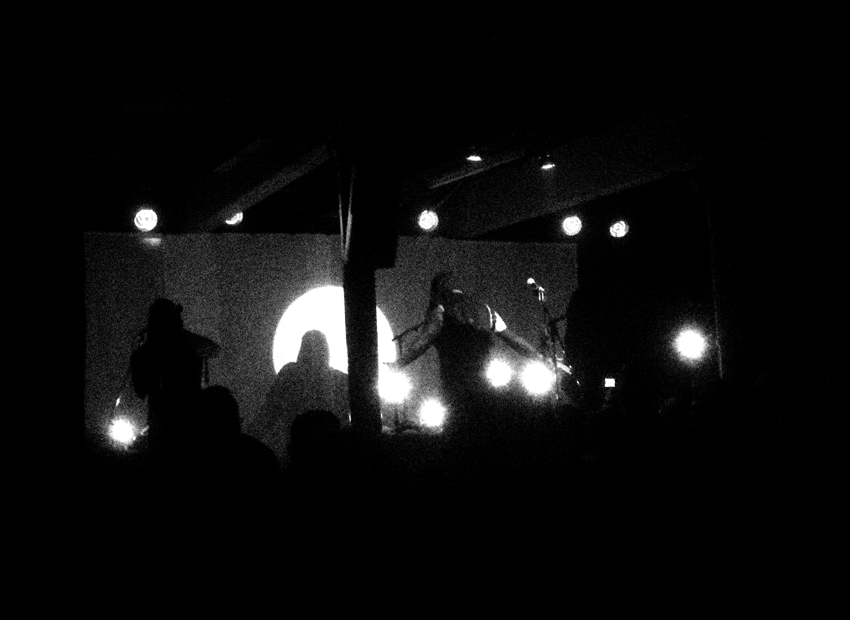 Shibalba is the type of stuff I’m not usually very interested in. “Ritual drone” what hardly goes anywhere. Kind of one-dimensional background for my top-1 dislike stage presence: Standing your hands elevated on the sides. There is something in this gesture what is utmost turn-off for me. Unfortunately it is done these days by just about every band of certain styles of music. But perhaps thanks to getting slightly intoxicated at this point, hah, material actually worked out fine. It was certainly suitable for background sound of drifting in & out from levels of drunkenness what was hoped to clear before next band started. 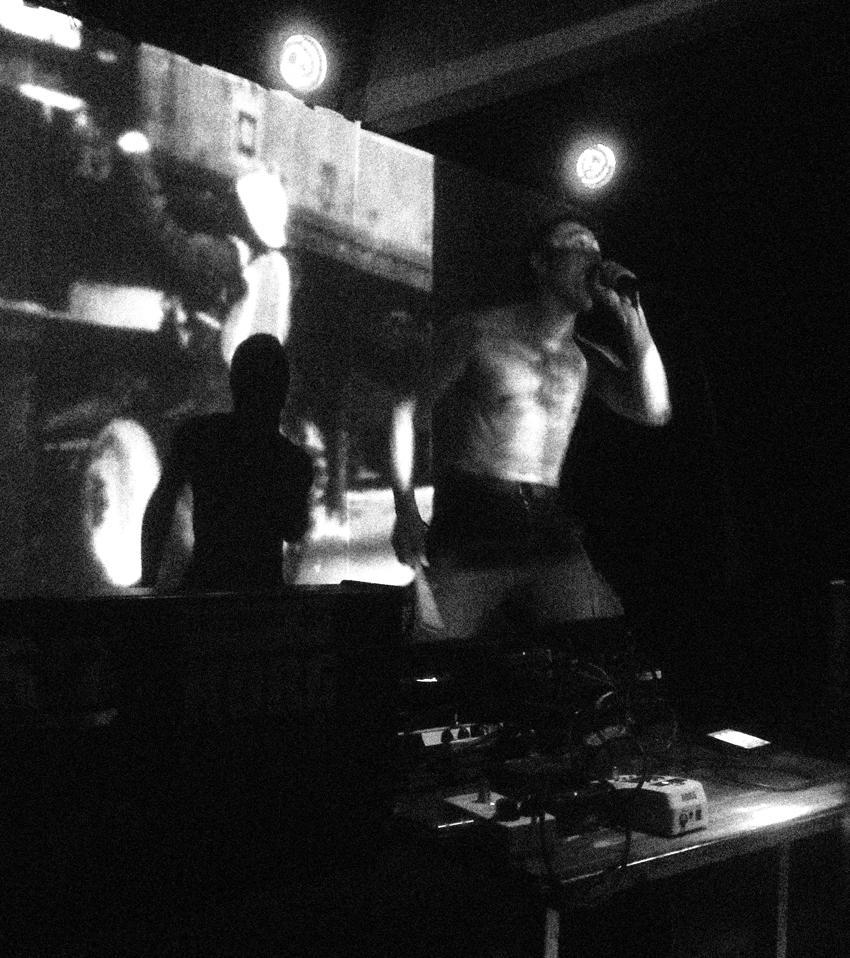 And indeed, with clarity of senses Linekraft proved to be among very best of the festival. First of all, perhaps it was the lack of true harsh noise, what usually gives the cathartic climax within industrial acts, Linekraft was closest to that. It has fairly free form of live-junk abuse, odd vocalization, high levels of grim distortion… yet sweaty shirtless muscular body-hammer smashing oil barrels through chains of effect pedals is very much The Industrial. Physicality and action were clearly elements what increased power of Linekraft. It’s total opposition of old men behind racks of effects and lap-tops wearing headphones… 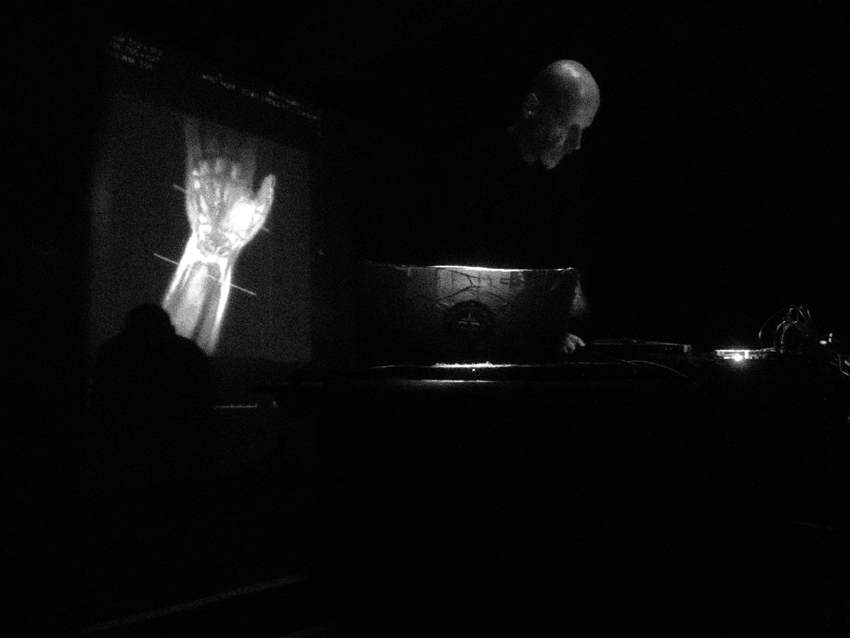 This was exactly the case with Bad Sector. Just before I left from Finland, I had been listening Bad Sector Pressurized Music tape (1997) thinking how great material is. Somehow technologically advanced for its time. Complex, but still dark and atmospheric in a good way. But this live show… hmm… I just don’t like much electronic beats in ambient. Not the live shows. And very rarely at home either. I theoretically like some, but beyond handful of artists, usually when beats emerge, it will be negative. It’s hard to me explain what are exactly the types of beats and rhythms I enjoy, but unfortunately Bad Sector delivered none of that. Most often presence of drum machine beats gives me feeling of generic dance music. 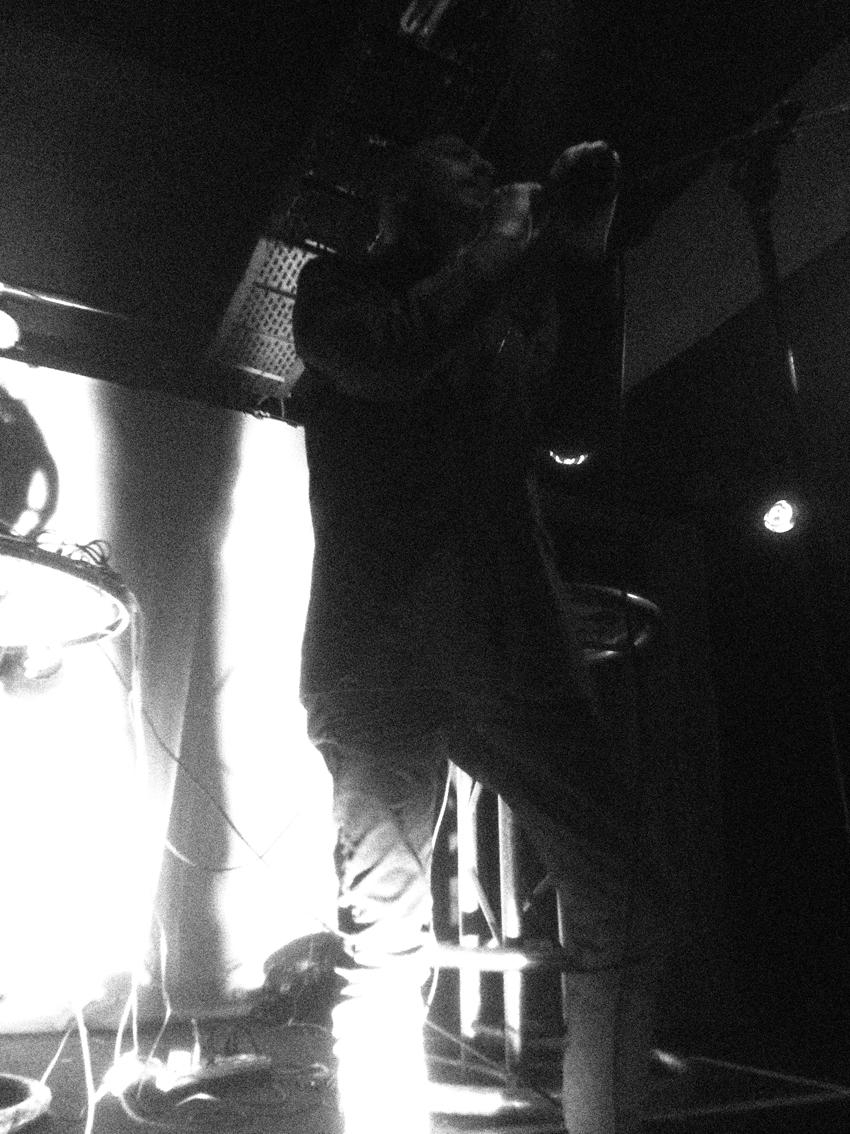 Operation Cleansweep was one of the names I was specially interested in. I have seen them one, many years ago. Circumstances then was that I have zero memories of gig other than too much of smoke. This time, visual presentation was almost non-existent. No videos. No smoke. No lightshow. Just one guy behind gear, motionless and cold. Other standing on front, doing vocals. Am I mistaken, or was this exclusively new stuff? At the same time, I was quite surprised that artists who I expected to deliver dosage of old hit tracks, didn’t. In a way, I must confess that I hope to hear White Patriots, Fuck Your Brains Out or Powerhungry… but in a way, I appreciated that they didn’t bring in nostalgia act, but went through set of new stuff?! In some ways, one would expect more. Germanic heavy electronics show with videos and stage action etc, but simply playing through set was ok – minimal and cold. 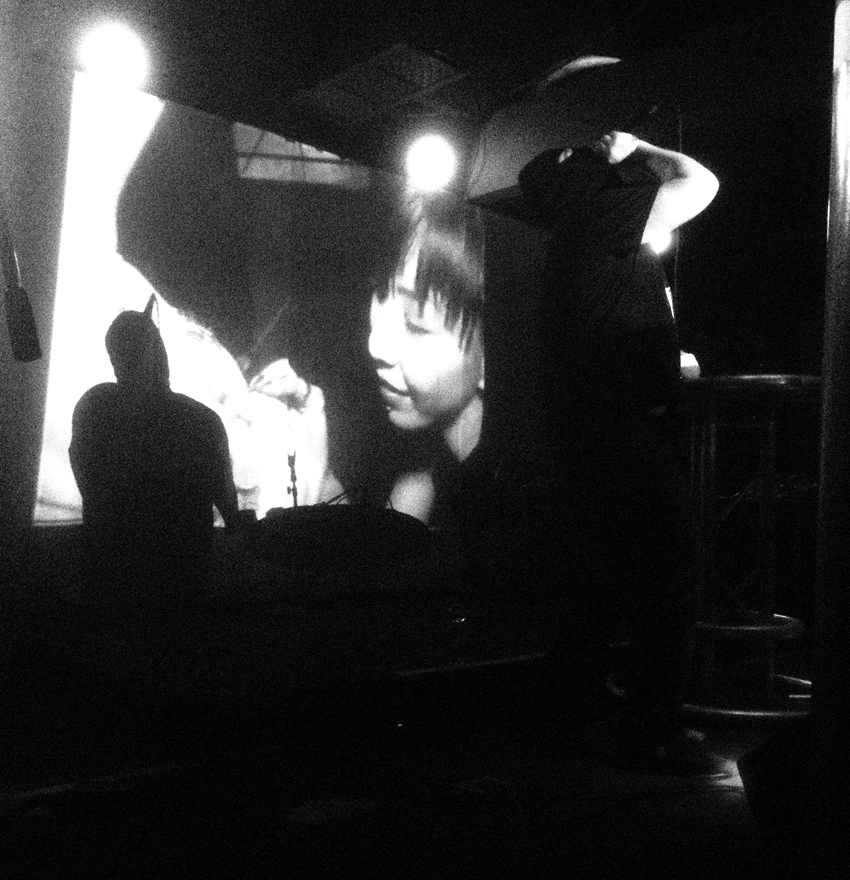 Saturday opening was similar to Friday: Opening act being fairly unknown artist doing his first (?) live gig. Just like Young Hustlers, Scatmother may be fairly new, but with couple CD’s it has gained quite many followers who appreciate the exaggerated brutality of material. I’ve probably said it somewhere already, but I feel like Scatmother might be now pretty much what Deathpile seemed to be in comparison to 80’s UK power electronics. You know, many old timers seemed to consider what they were doing, still sort of artistic, with level of intelligence, irony, black humour, clever experimentation etc. Fast forward 10 years then suddenly these Americans like Slogun and Deathpile blast blunt electronic noise and growl about murderous sex and death, with utmost lack of British sense of humour. Well, fast forward another 15 years and it may seem amusing, but suddenly Deathpile and Slugun seem like clever and innovative and joyful when you put them next to new generation of vile power electronics. Scatmother being almost exclusive about gutturally screaming as offensive lyrics and man can regurgitate on paper, combined with sound samples what make grown men shiver in disbelief. So we’re listening to abusing kids and women getting beaten to pulp? Hah, well… Yes, I guess so! Solid raw electronics oscillation and crackling and offensive man with mask standing in front of screen displaying bloody japanese needle-torture. It’s like back in the day when people used to be into nasty videos, old school traders were offended when they felt they are into art form: Gore flix. And then these new disturbed fuckheads are actually trading and watching autopsy videos and cat killings. That’s about the development of one fringe side of power electronics, hah… Scatmother live was ok, but it proves couple things. One man vile PE works best at situation like Obscurex Kontti venue. With loud ripping amps. On big stage, as opening slot of fairly big festival, it was good – but not ideal. 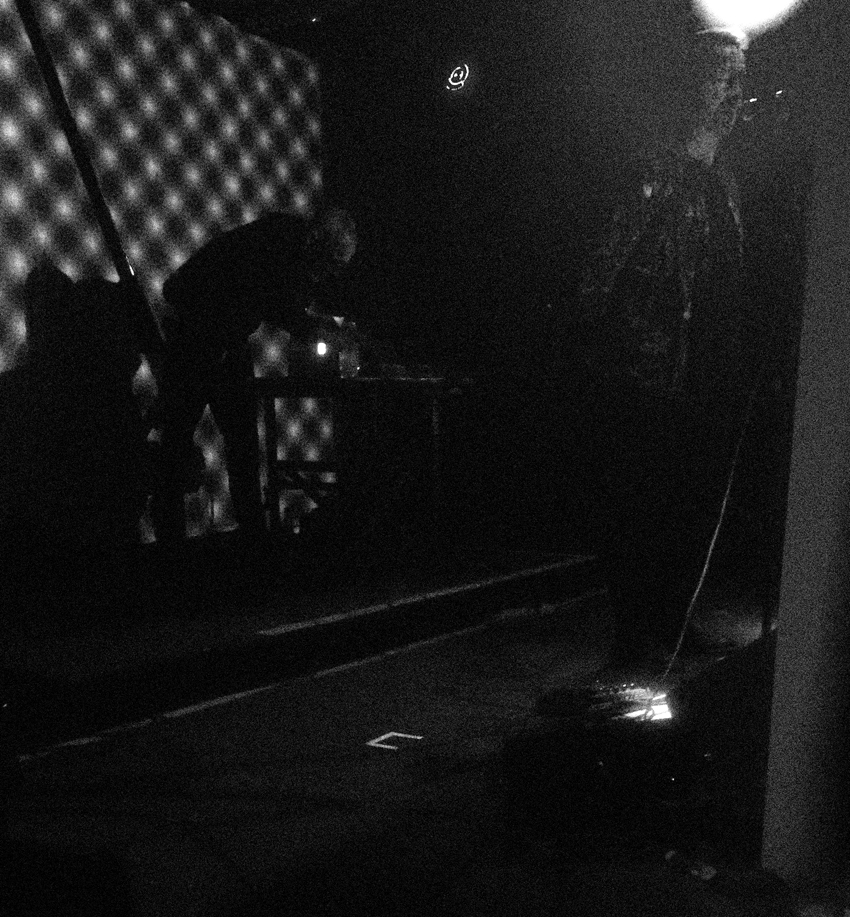 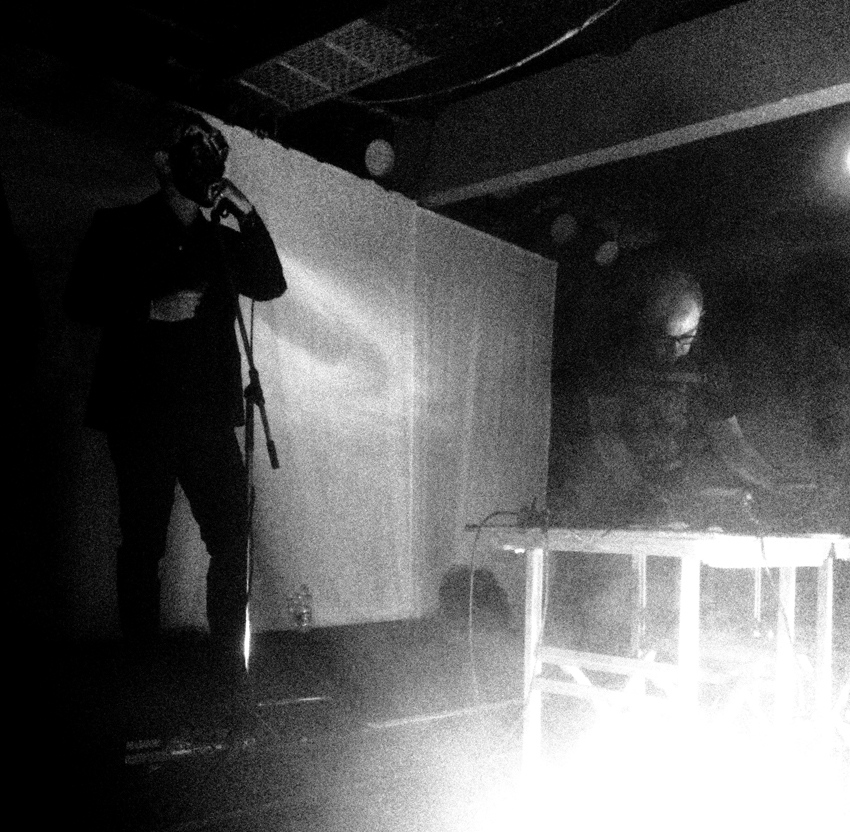 What a weird band that is! I have always had obscure relationship with Iugula-Thor. From old era of band, I have pretty much everything. Almost every case, I didn’t like it at first, or some elements of it, but grew to admire. Latest being Opera – which I never cared much on tape when it came out, but CD reissue proved it was fantastic release! From new stuff, haven’t heard many yet. This set included many of the classic tracks, somehow edited and manipulated. I’m pretty sure they used Wheel of Process and Assholes material there, but also new things. Performance. Fuck. Two older Italian men, one focusing on making the sound, other doing sound and vocals, and having oddest stage presence seen for long time. I recall old Old Europa Cafe VHS compilation with shirtless muscular Iugula-thor yelling over electronics. Now you got grey haired man with eye-liner masks, looking like Celtic Frost meets Death SS coming from office. Wearing regular suit, but with strong eye masks, sometimes odd king’s crown or other demonic head-gear. Sometimes feeling as if he was nervous and fucking up with props, masks falling or such, but it was so bizarre, this set was among highlights of fest. Ended up buying the new LP on Bloodlust! -label. Not yet had time to listen it. 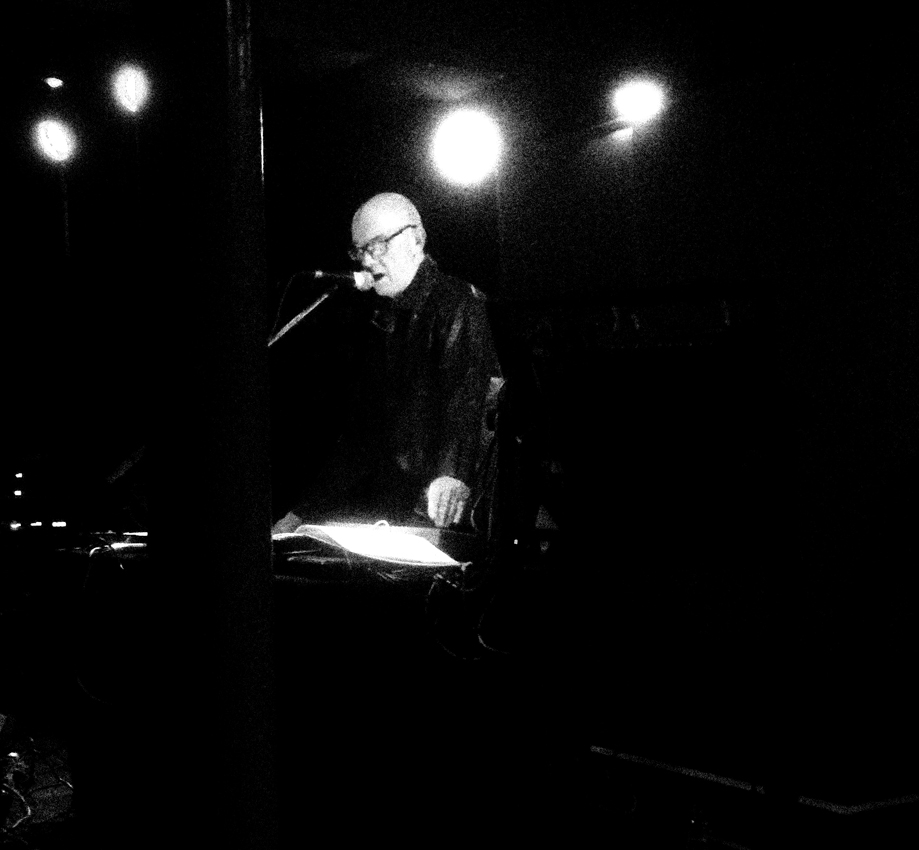 Thighpaulsandra was yet another of beat oriented acts. Huge rack of effects, apple computer glowing in front, and processed electronic beats. No matter if man has impressive musical CV or lifestyles, the musically offered exactly zero to me. 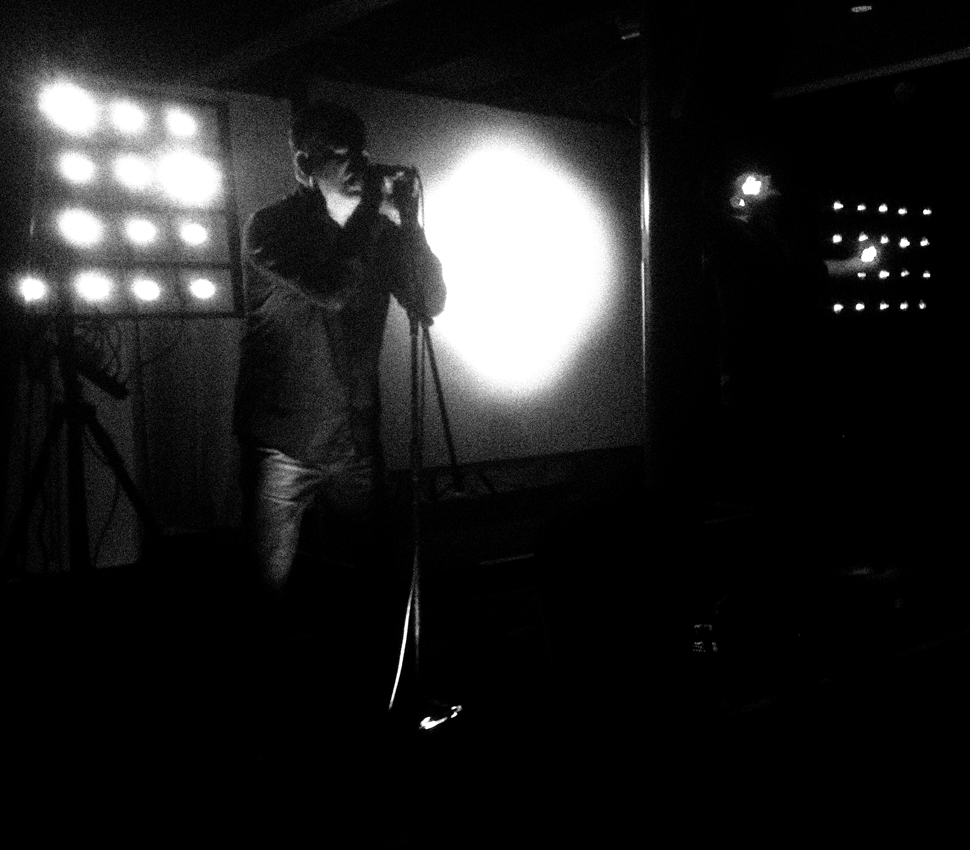 Etant Donnes was project I didn’t know what to expect. All their stuff I have, is very early. Haven’t followed what they have done since 80’s. I was expecting this could be like Club Moral was in previous festival. Maybe performance piece. Maybe old timers fooling with goofy gadgets. It turned out to be quite close to what I expected, but at the same time, something totally different. Performance? Yes. But what a energetic burst! Two men yelling non-stop over simple old fashioned light show what could have been impressive in east Germany in mid 70’s. But it was no nostalgia act. Men putting everything into loud and sweaty yelling and physicality. One being more distant on stage, other getting in middle of crowd in frantic action. Finally Etant Donnes brothers stood face to face on stage – going into half hugging half fist fight kind of stage action in machine-gun-like strobo light assault and looped vocal rhythm. I feel that there is all the elements I could have disliked what I saw, but some unexplained quality set Etant Donnes to be among very best of the fest! 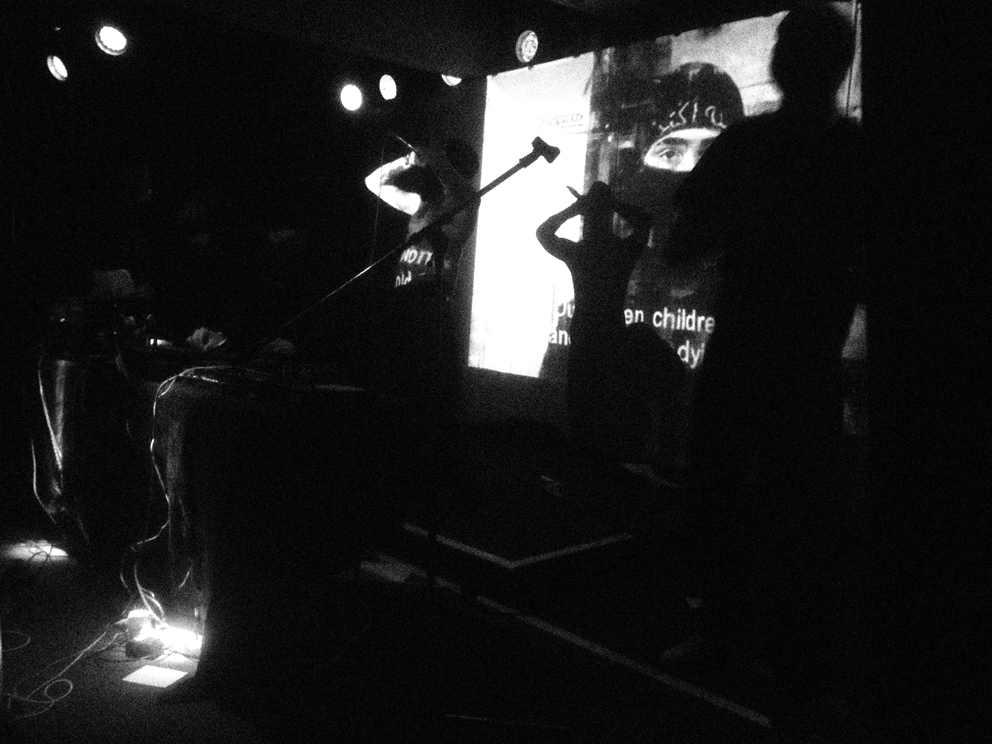 Survival Unit had no problem climbing on stage after them, though. It was sure, they were going to be so different from old performance art, that you can’t really compare these groups. Survival Unit early days of militant and focused cultural terrorism was now more drunk, more chaotic, more drugged. Perhaps too many people on stage compared to what was actually done. Even if Survival Unit sounds different, with this live show, it leaned quite clearly towards Alfarmania live actions. First part of the set felt like nobody knew exactly what was about to be done, but when No Surrender -track from rather well known 7″ by State Art -label started to blast from PA system, something switched on, and Survival Unit appeared to find their element. Since that song, set went through very satisfactory manner. I’m sure that the chaotic stage presence turned off some who expected firm and militant assault. Now you had one guy in party mode, couple others standing and not doing much, microphone being passed on from member to member with large contrast on sound and volume. At occasions, being like Survival unit on records, but other times being like Swedish industrial live music often appears to be: On verge of total collapse, with danger of everything falling apart – but still makes it in the end.

I feel it was good ending for the festival. I hope Tower Transmissions keeps on going. To me, positive sides always have surpassed the negative. What if not all the bands are remarkable or someone personal taste? I’m glad to see them put unknown acts on the bill and offer diversity! I’m glad they have guts to mix veterans, newbies, trusted names and purely gamble what will be result. Not just safe bets. I like the venue being big enough to actually see bands play, but not giant hall, so it works out for most of bands. Perhaps handful of more pure noise assaults could have been good. Jaakko Vanhala, The New Blockaders, and such worked out so well in past. I don’t know how big part of audience is into beat oriented material, but for me it appears as if on every fest, crowd responds the most for loud and brutal noisy stuff than ambient, lap-top industrial and stutter-beats. Lets hope there will be another fest and another good line-up!

Thanks for the Eric, Ina and rest of Tower Transmissions crew! 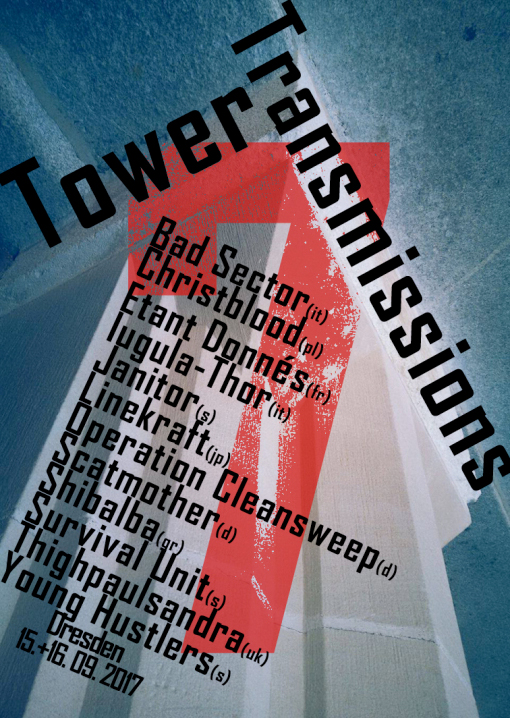