England’s Hidden Reverse – A Secret History of the Esoteric Underground 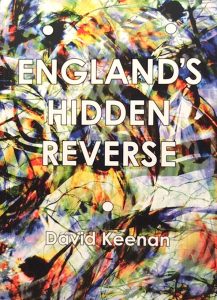 Those who remember COUM Transmission, Throbbing Gristle, and its associated culture explosion in the 1970s remember, perhaps most of all, their use of found imagery in live performance. Decontextualized films and stills of genocide, torture, ritual circumcision, and famine were featured at most TG shows. And self-mutilation, bondage, and sexual intercourse were part of later COUM This drive toward obsession and violence defined the era as ‘Industrial’ more than the music ever did. And all the first wave of violent electronics projects—SPK, Maurizio Bianchi, Whitehouse—drew on a related set of influences—Viennese Actionist performance, Russian Futurism, the crimes of Peter Kurten, W.S. Burroughs’s theories on information as power, and so on—even if their working philosophies were radically different. Industrial music was never about a dance beat, it was audio-visual art made by non-musicians, and the artists used images of transgression not for shock value, nor—worse—as sensation, but rather, author David Keenan argues, as a form of self-interrogation, a refusal of rational thought and inclusive morals.

Keenan’s 2003 book England’s Hidden Reverse, updated and republished this spring after more than a decade of continued research, documents the lives and work of the men and women who ritually resuscitated the corpse of English music after Throbbing Gristle tore it limb from limb. The nearly 450 illustrated pages of England’s Hidden Reverse are derived from the most primary of sources—direct interviews, correspondence, and even cohabitation with the subjects. Keenan weaves together in a triple helix the stories of three introverted artistic projects: Coil, Current 93, and Nurse With Wound. While outwardly they share very little, their histories (and fan bases) are so thoroughly intertwined that they cannot be dissected separately. What really binds these projects together into a scene is not, Keenan says, a common voice or a common fate, but rather an obsession with ‘night time imagery’ and its use as a ‘descent … into the subconscious and into the repressed—psychologically and historically—via the interrogation of the possibilities of transgression.’

If Throbbing Gristle served as a vector for audio-visual descents into the human night, they succeeded because projects like Coil, Current 93, and Nurse With Wound carried the torches onward and into new worlds beyond confrontational electronics. If these groups can be linked by their archaeology of the inner realms of imagery, and the channeling of the ‘murky subconscious’ into art, they are made distinctive by their lives and approaches. Steve Stapleton describes his work as Nurse With Wound as ‘surrealism in sound’. He didn’t even own an instrument in 1979 when he released his first record, and in 2016 he still can’t play one. His modus operandi is one of the committed non-musician building a private esoteric universe at home and in the studio. After scores of albums, Stapleton continues to maintain that his output is purely experimental, even clinical. Though he for years insisted there was nothing of him personally in the music, he now reluctantly admits there is a lot more of himself there than he realized. Coil, while also employing Surrealist methods, composed electronic music of incredible rigor—sometimes expansive spatial landscapes, sometimes claustrophobic boxes of psychosexual mania, sometimes drug-smitten EBM. The possibilities feel infinite, yet you can always hear the Thames flow. Its underground passages and secret channels, along which flow the most haunting thoughts. David Tibet, operating since 1983 as Current 93, sees the thread running through his immensely varied output as the harking back ‘to a lost sense of innocence’. His output has ranged from Crowleyian tape-loop exercises to forlorn and damningly cohesive harmonium and piano albums, to songs in a matured English folk idiom reminiscent of The Incredible String Band and Shirley Collins—all sealed with the lyrical imagery of Tibet’s apocalyptic and Kierkegaardian Christianity.

England’s Hidden Reverse is more than the story of these three groups, and the personal histories of their membership. The artistic and personal connections these artists forged with each other and with the London-based scene they helped foment were deep and complex: Tibet and Stapleton have collaborated on several occasions, and Stapleton with Whitehouse, Tibet with Death in June, Balance (of Coil) with Tibet, and both, up to a point, were both inspired by Austin Osman Spare and Crowley. Sleazy was a member of Throbbing Gristle and Psychic TV, which were, in varying degrees, formative for Tibet, who also was enamored (also up to a point) with Psychic TV. This is only the surface of the complex artistic genealogy described in England’s Hidden Reverse. And as their notoriety—and infamy—gradually grew, with events like Equinox (21 June, 1983), they helped to define a burgeoning scene that included other forms of post-Industrial art and culture—a list of which Keenan offers: ‘modern primitives, Nazi geeks, bedroom occultists, boot boys, [and] autistic noise rockers.’ The same enduring countercultural anti-Thatcherite boogey men that sought to turn England inside out.

Ironic, then, that Coil, Current 93, and Nurse With Wound were associated with these scenesters, since after all, David Tibet mourns the loss of innocence, including England’s, and Coil was more concerned with the rise of the Thames tides than with the institutions on its shores, and Nurse With Wound was too Dada-cracked to spraypaint class struggle slogans. The connection is deeper, Keenan maintains. It is found in the curious phrase ‘England’s Hidden Reverse’, in which he refers to the ‘descent into the dark of our evolutionary past’ effected by the creative processes of these obscure groups; but also to an observation made by John Balance, of Coil, about his artistic motility: ‘I’m on a lifelong mission to get rid of this equation, dark is evil and light is good. … Light—illumination—comes from within the darkness.’

If this idea sounds like intellectual currency from the early nineteenth century, this is not casual déjà vu. The artists of the Romantic Era, both in England and on the continent, in their turn away from aristocratic values and the inauthenticity of moral absolutes and truth, followed a very similar artistic path. In the work of Blake, Novalis, Baudelaire, et al, it is the fixation on an inner vision, and reliance upon emotion and irrationality, improvisation, esoterica, and the apprehension of horror, rather than external arbitration of values, that bound them together as a movement. Even if Current 93, Coil, and Nurse With Wound would appear to have little in common with each other in their subjects, compositional methods, or lifestyles, England’s Hidden Reverse suggests there is a common inner dialogue between them, one which remarkably mirrors that of Romantic poets and painters. Whether their dive into darkness as both self-discovery is intellectually continuous with the nineteenth century, or a sui generis bulwark against the hyper-rationality and ultimate power promised by the information age, with its endless images and state-level ordering of society, is for someone else to decide. It’s enough for now to suspect Stapleton, Balance, Sleazy, and Tibet will be someday regarded as modern Romantics, with similar fascination—and apprehension.