Lian Kutsu (translates something like: Call of the Filth) has organized shows before in various locations. This time they used venue better known from Obscurex related events. Not sure in what extent different people were involved, but it seems as if Obscurex was the one providing part of the sound system here and also Bizarre Uproar played through their own gear.

I am very glad to see more organizes getting involved in noise & power electronics. There has been some discussions if noise activities in Finland has been getting smaller over recent years. This view is mostly caused by lower activity of S.I.C.K., the end of legendary Bizarre Bunker, old TVO in Turku being on hold long enough to create long lasting silence in Turku what was hardly substituted by new venues. Perhaps also Sarvilevyt/Freak Animal stopping noise gigs after Rooster Pub in Lahti closed its doors.

However, there has been great number of things happening. Always busy Obscurex enjoys cult reputation for it’s insane Kontti gigs organized in cargo container in distant industrial area of Vantaa. People at eastern Finland city Joensuu has been restless in putting events. Also happenings in Oulu, Tampere, Lappeenranta and so on. So has been growing number of “different kind of finnish noise”, which isn’t directly related to 90’s noise type of vile filth.

Every few months new artists or project seems to emerge. Also from people not widely known from former noise projects. During 20016 we have seen bigger organizers bring artists like Bastard Noise, Trepaneringsritualen, Prurient and such into music festivals. Therefore it would be foolish to conclude there has been any kind of downwards direction! Few formerly active labels or organizers have taken little rest as even without them, we’re withnessing some sort of noise events so many times a year, one could only dream of it 15 years ago.

I personally missed MELUN KIUKAAT first part. It was organized in youth center Oranssi. Edge Of Decay and Keränen were relatively known names, while most of the rest would demand further knowledge of Finnish noise. It’s unlikely that so many would be familiar with Joulupukki, Satanoid, Antero Vipunen, Tyhjiø and (owt kri). People who attended, told it was hit & miss type of event.

MELUN KIUKAAT II, had much more uniform line-up. It included such provocateurs, that it could have been impossible to organize this in Oranssi due underlying politically correct / safespace type of policy of venue.

When you put together EDGE OF DECAY, BIZARRE UPROAR, UNCLEAN, MASTUR-BAIT, CIRCLE OF SHIT and AHOLA & SILANDER, you know event is going to be noisy and nasty.

Diamond Bar in vantaa has become famous recently due frequently changed owners, handgun incident, overall grim outskirts-of-the-city small bar atmosphere. However, it remains perfect venue for shows that would have no place in posh scene clubs of city central or “socially aware” venues. Piles of gear at the stage. Small merch stall next to door, scattered with handful of Filth & Violence and Supreme Analog Torture Records titles. Cheap drinks at the bar. Very relaxed atmosphere without any too enthusiastic doormen or such. Lots of people from all sides of noise as well as impression of people linked to other subculture – be it more punk, metal, skin, industrial, etc.

MASTUR-BAIT started. His previous show was rather impressive, as I had no expectation what it could be. Now this was totally different. Instead of straight forward harsh noise brutality, we would withness something one could call conceptual art!? Not the type of stuff what could happen in Kiasma -type of environment, but merely in rough bar corner at Vantaa. Mixing together Tony “Viikinki” Halme song to clumsy-as-fuck martial industrial drum beats reached level of noise comedy. When slowed down song chorus started to repeat with loop, and mr. MASTUR-BAIT added layers of contact mid’ed and distorted scrap metal noise it lived up to promise of what would sound if Laibach played Tony Halme cover! Mastur-bait eventually proceeded to harass audience with mannequin doll hand, with big smirk on his face and gig went to some next level. Being clearly funny, but in good way. At the best, music sounded decent, but as said, it appeared most of all conceptual piece on very specific topic. 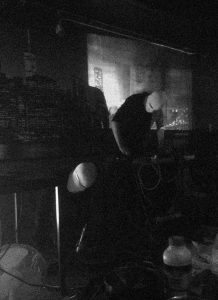 EDGE OF DECAY is better known as solo recording project. Freak Animal Records is just about to release new tape, where EoD recorded material as live duo. Pre-view of tape shows rather accurately what this live gig aimed to be. Perhaps sounding the most prototype what some people see as new Finnish noise. Two men with commando masks, cymbals and other scrap metal. Feedback. Brute smashing of metal junk, with little to zero artistic element. Mostly just being brutal and creating horrid distorted sounds. As a person who has withnessed countless of live shows all over the world, I can say that there is something very Finnish in this approach. While it may not be most innovative, clever, advanced or cool, it has certain honesty what appeals to me. It has more in common with noisecore, punk or rough underground metal attitude than anything in common with experimental art or even “industrial music”. Show started slow and slightly out of balance. Junk wasn’t heard well enough below raw tone of electronic noise. Long piece repeating the same, forced you to wait for something to “start happen”. Finally Edge Of Decay proceeded into full harsh noise assault which gave entire set satisfying feel.

Fairly new project CIRCLE OF SHIT, was one of main interests for this night. I have only heard one tape. This tape was great positive surprise. Would you expect people of international noise scene to get excited of band called Circle of Shit in 2017? Not sure, but anyone who has soft spot for what has happened in Finnish noise scene during 2000’s, could be impressed by it.
Unlike the tape I heard, this live show was far more noisier. No spoken word samples or other more “musical” elements. However, it had clearly thought out patterns how set will be. Execution of all elements was done well. Vocals tended to be quite buried in mix, yet complexity of noise layers and tastyness of eerie feedback drones, energy of high pitched shrieking vocals… everything worked out very well. You can not say C.O.S. would follow specific Finnish artists, but his style fits well among many currently active ones. Including everybody on the bill this night. I am not familiar with many artists from Jyväskylä, but hopefully this project will inject some energy locally. Back in the day, there happened live shows and was some artists too. 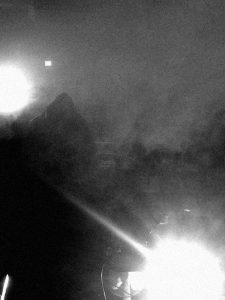 I wasn’t very convinced of UNCLEAN latest album. I still prefer earlier releases with far more rotten sound quality. Perhaps it was one element why this gig ruled. It was easily the best what I have seen from him. While mr. Unclean appeared to be slightly disappointed of the set, I’m in lucky position to not know what it was supposed to be. I only know what it was. Heavy bolts of synth noises and oscillations combined with distorted vocals. Unlike at some other shows, sound melted into one heavily distorted mass, where vocals blended very nicely into simple, yet effective synth patterns. Vocals would rip through the electronic surface yet remain part of sound itself, instead of being somehow artificially on top of sound. I’d think it’s like going to direction of STAB ELECTRONICS and OPERATION CLEANSWEEP, but ending up to rawness of VICTIM KENNEL and SUBLIMINAL due brute PA sound. The end of set got noisier and was perhaps too long, but despite some flaws, not only best Unclean set what I have seen, but way stronger than previous full length album! Not sure if he wanted sound to be cleaner, but please: Keep it UNclean! 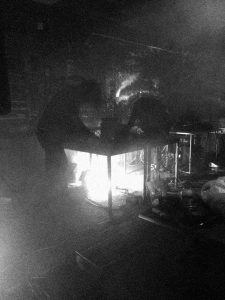 AHOLA & SILANDER from Kouvola. Another unexpected noise city. It’s hard to name almost any other Kouvola based noise bands, excluding punk scene related early-mid 90’s noisecore/computer noise things.
I had only been exposed to one of their tapes, and concluded it belongs to some of the most interesting new projects in Finland. My only objection is that this material certainly sounds like it would require “band name”, instead of just names of its makers!
Set started with two guys standing face-to-face on stage with two tables filled with gear. One quietly goes …1, 2, 3, 4 and they just hit in full throttle harsh noise havoc. Not far from band like Incapacitants. After roughly five minutes, they slow down. Turn down volume, almost into silence. Almost in awkward silence. Luckily there is not much of audience chatter, so it works out when they start to re-building their sound. From little details of multi-layered junk metal scratching, ms-20 pulses and sequencer beats, into all the time louder and more complex stuff. Finnish language existential lyrics shouted through distortion, over slowly moving industrial noise background, that is complex and detailed enough to be interesting even as industrumental piece. Show continues through various phases, until they finnish it with style. I’m not sure if everything went as planned, but few moments what seemed to create them unexpected challenge, they dealt with it like guys who know what they’re set to do.
I don’t know if their former tapes are available in any easy way, but just like Circle Of Shit, I’d recommend to try to grab something. 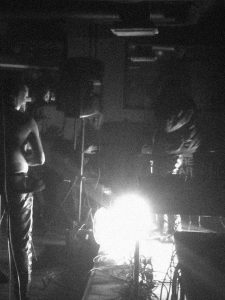 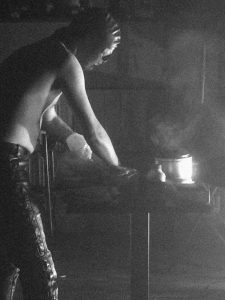 BIZARRE UPROAR is already such a household name in Finnish noise scene, that you know basically two things in advance: He is going to perform something you can sort of “expect”, but also that he ALWAYS delivers. Simply among absolute most reliable noise acts to always do great set. Perhaps it is thanks to be artist who actively rehearses his songs. Performs them live for the releases, and performs them in live gigs. Not from lazy  playback, but actually re-creating the songs like actual live musician.
This time we heard the second song of new “Sikiöasento” album. Squeeling tormented animals, raw bass-amp blasting electronic noise drones. Vile slogans screamed through delay. Neat high pitched electronic “tones” and massive junk noises ending the set.
Visual element of the set was most explicit of the evening. There was some obscurities in video material screened by others, but teaming up with artist JUKKA SIIKALA is obvious route to take a step further. He performed rather provocative set of cutting up rats and cooking their intestines to create brutal smelling smoke and evantually using electric fan to blow all the stench into crowd.  Sound of the linked video material is terrible, and won’t give you any idea of actual detail and composition of piece, but entertaining view of transgressive noise art. During their set, some amusing spontaneous audience reactions included female nudity and wild dancemoves.

Nice amount of people turned up and event went without any delays or technical flaws. Special Interests thanks the organizer and artists and people who submitted photo & videolinks. 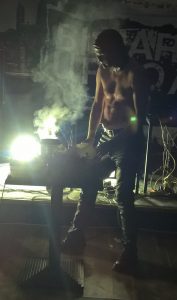